Under the Auspices of the INTERNATIONAL PHILHARMONY FOUNDATION and the

GERMAN CULTURAL FOUNDATION
WORLD ACADEMY OF SCIENCES & ARTS
presents the biggest scientific project of our time
THE CLASSICAL COMPOSER AND MUSICOLOGIST PETER HÜBNER
on his International Project of the INTEGRATION OF SCIENCES & ARTS
10.
The Introductory-Pack
for first authentic experiences
in the higher states of consciousness
on the way to intuition 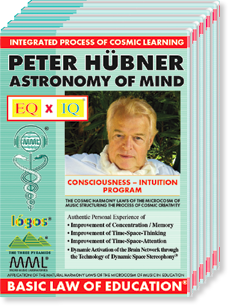 “It is beyond question: Whoever is seriously interested in the project of the integration of sciences and arts – and especially: who wants to participate or get personally involved in the realization of this supreme, known goal of all times in the fields of science and art –, for him the personal acquaintance with the higher states of consciousness and especially with intuition is an essential step.

The experiences in the higher states of consciousness are the key to the integration of the sciences and arts.
And in the opinion of the greatest thinker in human history the simplest and most ingenious method for an access to this key is the application of the harmony laws of the microcosm of music: as a reliable educational means for entry into the higher states of consciousness and for the development of the power of intuition.

We must take seriously also Albert Einstein, when he notes by own experience and tells us:


‚Intuition is everything.‘
Albert Einstein


And he outrightly points to the higher states of consciousness, by declaring:

‚On the path to discovery, the intellect has little to do.
There is a leap in consciousness,
call it intuition or whatever you like,
and the solution comes to you,
and you do not know how and why.‘
Albert Einstein


The purpose of these special 5 CDs, which serve here as information carriers for the inaudible harmony laws, is to successfully get to know this extraordinary educational tool and to provide access and insight into the cosmic worlds of the higher states of consciousness.


The harmonical music recordings have proven in numerous medical studies that they succeed in this.

The objective scientific studies using measurement methods of modern scientific medicine did not particularly prove that these recordings lead to specific higher states of consciousness – because this was not the subject of the studies; their purpose was purely medical.

But the findings – which were verified for almost two decades at numerous universities and research institutions from different parts of the world – have proved, that due to this music and due to the inherent powerful harmony laws of the microcosm of music leaps in consciousness were brought about into higher states of consciouesness and particularly also into the field of intuition: because only from them the medical effects can be explained.

With the introductory pack you will also get a kind of roadmap for the specific and successfull access to the ability and development of authentic cosmic experience and cosmic thinking – here the word ‘cosmic’ is in no way related to the material cosmos, as the materialist is used to imagnine, but points to the inner abilities inherent in us humans: to feeling, understanding and intellect with their cosmic potential for the development of higher states of consciousnes and thus also to the power of cosmic cognition which lies in intuition.

Without this inner natural development of cosmic capacity on the level of feeling, understanding and intellect the integration of the sciences and arts can only remain a good idea.

But the current state of knowledge in science and art lets one recognize that the way is paved today for the practical utilization of the harmony laws and thus for the integration of the sciences and arts – even if not every scientist or artist must go it. Just as not every physicist or mathematician must not understand the theory of relativity or quantum theory.

But in practice the integration of sciences and arts includes this understanding - and not just for physicists and mathematicians, but for everyone.
Because understanding such cosmic theories does not depend on expert knowledge – otherwise the representatives of these fields would understand them –, but on a consciousness which is located totally beyond these special fields.

For this reason Albert Einstein notes:

‘A leap in consciousness has to take place’
Albert Einstein

And in regard to this authentic understanding (e.g. of the theory of relativity or of quantum theory) he notes almost dramatically: more than clear:

‘Whoever is not able,
to explain it to a six-year-old child
has not understood it himself.’
Albert Einstein


Because consciousness and/or the development of consciousness is not a matter of age – such as the case of Mozart proves in the field of music.

We will free ourselves from the existing superficial attitude towards music, which the presentday music scene suggests to us, and will unlock those inner cosmic human powers in music which, by the help of the harmony laws, can lead us successfully into the higher states of consciousness.
This is our new, most important task in science and art.
And the numerous scientific studies have verified by many objective measurements that it is possible.

The further specific and systematic development of these and other experiences will then open up step by step the gates to the higher cosmic states of consciousness and in particular: the cosmic force of intuition.

It is an endeavor for developing the own ability of authentic cosmic cognition, judgement and thinking as well as an integrated science and art, which is appropriate to the natural cosmic dignity of man.

The experience with the 5 CDs and their cosmic content in the form of music, structured according to the cosmic harmony laws of the microcosm of music, is only the beginning of a great cosmic journey on which we will unlock our cosmic potential.

Our current scientific findings and insights provoke this said step – on a longterm basis we cannot escape it, if we do not want to become blind in great numbers towards the great theories and scientific-technical achievements, as this has been the case already towards the insights and revelations of the greatest of our ancestors.

So do not hesitate to set out on this journey - it’s worth it. Get the program, the CDs are cheap enough.
The sale proceeds are used directly and exclusively for implementing the project of integrating the sciences and arts.”